Wealthy banker apparently a godless banker with a troubled conscience kills himself by hanging. What could trouble a wealthy man so much that he hangs himself?

One thing about the rich - they know that the man who can plan for 50 years is a very intelligent, wise and prudent man indeed! Most of the wealthy pride themselves on their ability to foresee years ahead. But if planing for fifty years is to be admired as a good thing, then don't you think that if you plan for all eternity would be wiser? After all eternity is more than 50 years. But this godless schmuck only foresaw his retirement from the bank - he certainly wasn't fixated on eternity now was he? 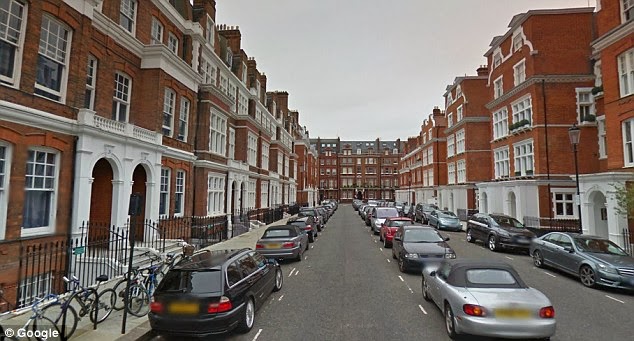 They say money can't buy you happiness - which is true and it can't clear your conscience either. What trouble the banker so much that death was more appealing to him than life?

Well if don't believe in hell or heaven then why not kill yourself?

Call these latest banker suicides a thing to come  - call it a demise of the financial world.


A former Deutsche Bank executive has been found dead at a house in London, it emerged today. The body of William ‘Bill’ Broeksmit, 58, was discovered at his home in South Kensington on Sunday shortly after midday by police, who had been called to reports of a man found hanging at a house. Mr Broeksmit - who retired last February - was a former senior manager with close ties to co-chief executive Anshu Jain. Metropolitan Police officers said his death was non-suspicious.Mr Jain and co-chief executive Juergen Fitschen said in an internal memo: ‘He was considered by many of his peers to be among the finest minds in the fields of risk and capital management.' They added: ‘We are deeply saddened by Bill's death. He was a dear friend and colleague to many of us who benefitted from his intellect and wisdom. ‘Our thoughts and condolences are with his wife and family at this time. We will remember him for his contributions to Deutsche Bank, thoughtful advice and personal friendship.’ Mr Broeksmit worked in investment banking - specifically risk and securities - and lived on exclusive Evelyn Gardens in South Kensington, which has an average property value of £1.9million. He is also registered to a high-value property a stone's throw from New York's Central Park. Mr Broeksmit's name appears on U.S. government records for the Broeksmit Family Foundation, which is based in the palatial 1185 Park Avenue building. The three-bedroom, three-bathroom apartment to which he is linked was worth $4,500,000 when it was last sold in June 2000. Daily Mail Read More>>>>>>

Look at these two sorry sonsofbitches 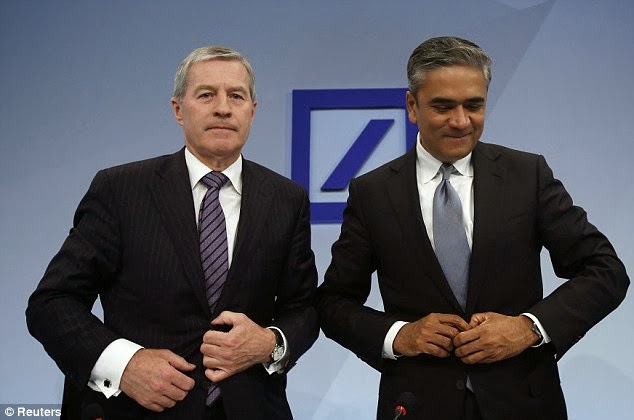 Tribute: Co-chairmen of Deutsche Bank, Juergen Fitschen (left) and Anshu Jain (right) called Mr Broeksmit 'a dear friend and colleague to many of us who benefited from his intellect and wisdom'

Typical godless corporate bullshit - a dear friend indeed! Maybe the godless pagan Indian can pray to his money god for a share in the wisdom of the godless banker who hung himself!
at February 02, 2014