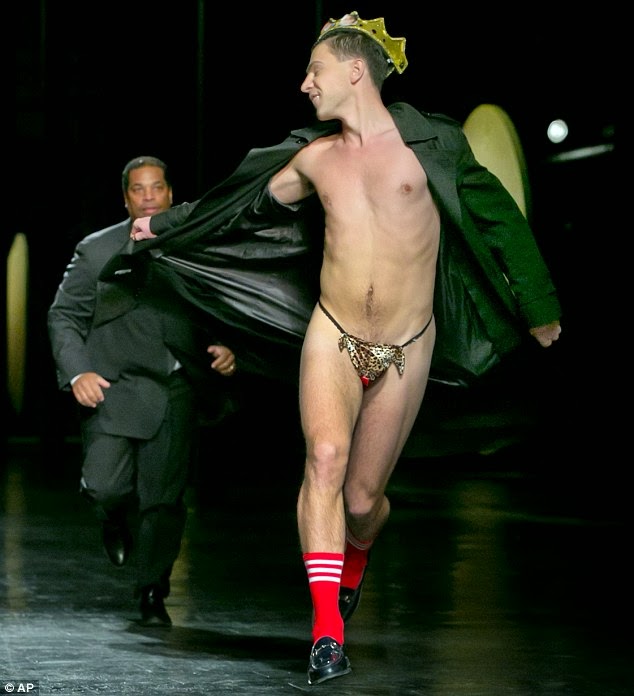 Q. 928. What is the second?
A. The sin of Sodom, or carnal sin against nature, which is a voluntary shedding of the seed of nature, out of the due use of marriage, or lust with a different sex.
Q. 929. What is the scripture proof of this?
A. Out of Gen. xix. 13. where we read of the Sodomites, and their sin. “We will destroy this place because the cry of them hath increased before our Lord, who hath sent us to destroy them,” (and they were burnt with fire from heaven.)


Fashionistas got a lot more than they bargained for this morning when a streaker was spotted storming the Prabal Gurung runway at New York Fashion Week. The man, who was wearing nothing but red tube socks, a black jacket, a leopard print thong and what looked to be a Burger King crown, briefly joined the models on the catwalk before being escorted out by a guard and bringing the show to a temporary halt. And he left such an impression on the amused spectators that he got his own Twitter account, PrabalGurungStreaker, within minutes of the hilarious incident, promptly tweeting: 'Crowns are in this season.' According to WWD, the brazen man was none other than Ukrainian actor Vitali Sediuk, who has pulled similar stunts at the Grammys and SAG awards shows. Daily Mail Read More>>>>>
at February 09, 2014