Defrauding The Working Man Of His Wages: Celebrity Chef Mario Batali Skimming Millions From Employee Tip Jar! Transcendental Meditation Made Him Do It! 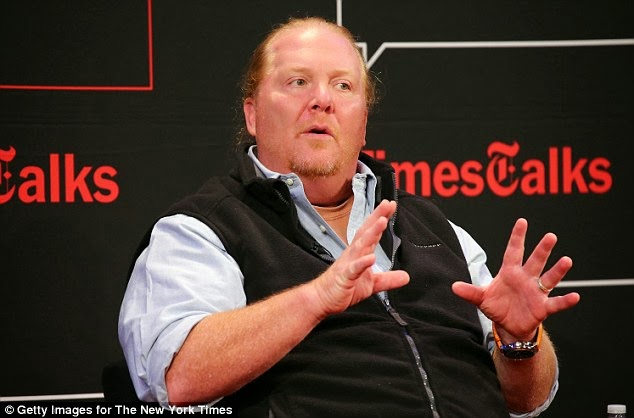 Practitioner Of The Dark Art Of Transcendental Meditation
What Does He Meditate On? Food?

Here's a guy who is supposed to be an Italian but he is not a Roman Catholic - instead he is a practitioner of the dark art of transcendental Meditation as taught by David Lynch. So instead of attending daily Mass and saying the Rosary and mediadting on the passion of Christ this fat and smelly slob does twenty minutes of mindless meditation as taught by Indian pagans. So far his TM has lead to steal 5 million in tip money from employees.

That would be the sin of defrauding the working man of his wages.

Which means that it does not look to good for the fake Italian Batali - I wonder where in the pit of hell Dante would place this sorry bastard with the gluttons? with heretics? with the fraudsters?

Celebrity Chef Mario Batali and his partner Joseph Bastianich have agreed to hand over $5.25 million to employees at Batali's several high-profile Italian restaurants. Man-in-charge Batali who was grilled last year for saying 'The way the bankers have toppled the way that money is distributed, and taken most of it into their own hands is as good as Stalin or Hitler, the evil guys', was charged with skimming dough from his own hardworking staff. Two thirds of the settlement will be shared by 1,100 captains, servers, busboys and various staff at restaurants like Babbo, Bar Jamon, Casa Mono, Esca, Lupa, Otto, and others provided they worked from July 22, 2004 to February 14, 2012, according to court documents.Daily Mail Read More>>>>