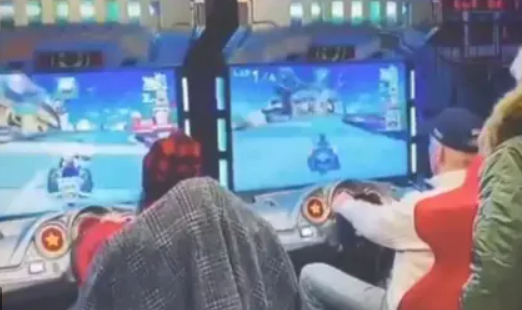 Biden plays Mario Kart with granddaughter during Camp David getaway
Nevermind the impeachment trial — President Biden spent time playing video games with his granddaughter during a weekend at Camp David, the presidential retreat in the Maryland mountains. Naomi Biden, the daughter of Hunter Biden, posted in an Instagram story Saturday that her grandfather beat her “barely” in a game of “Mario Kart.” “Secret service made an exception and allowed him to drive himself,” she posted, linking to a short video of them playing the video games. “A little rusty, but he still won (barely).” The White House said that Biden and his family are spending the weekend at Camp David for the first time since he entered the White House in January. Other than meeting with his national security team, the president has nothing else on his schedule. He arrived there on Friday afternoon by motorcade after Air Force One landed in Hagerstown, Md. Source
Well at least it looks like Biden didn't attend Sunday Mass and receive Sacrilegious Communion....
at February 16, 2021