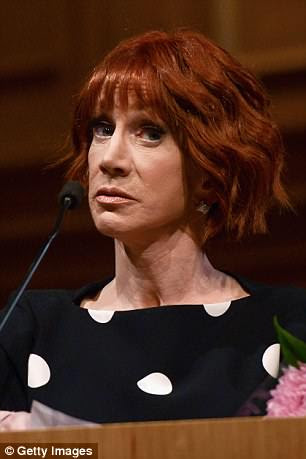 Apostate Catholic soon to be punished for her many Sacrilegious Communions

F*** you Melanie, you feckless piece of s***': Kathy Griffin goes on shocking tirade against First Lady and demands she stops her husband from separating immigrant families

Kathy Griffin unleashed a profanity-laced tirade against Melania Trump shortly after the first lady released a statement about the separation of immigrant families along the US-Mexico border. The first lady's spokeswoman Stephanie Grisham said in a statement to DailyMail.com, CNN and other outlets that 'Mrs Trump hates to see children separated from their families and hopes both sides of the aisle can finally come together to achieve successful immigration reform'. 'She believes we need to be a country that follows all laws, but also a country that governs with heart.' In response to that statement, Griffin had a few choice words of her own. 'F**k you, Melanie. You know damn well your husband can end this immediately...you feckless complicit piece of s***,' the comedienne tweeted Sunday morning. Source