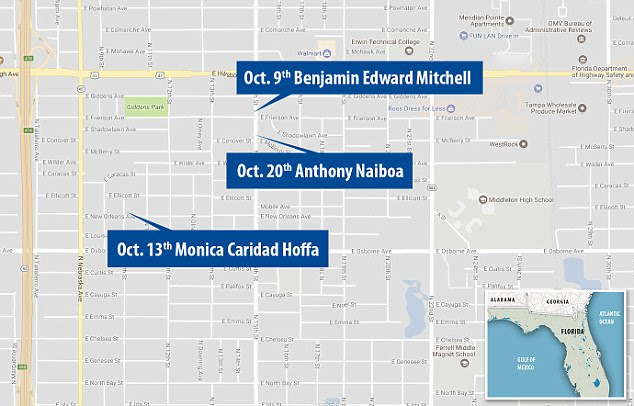 Wealthy man is killing for the thrill of it - he has nothing better to do.

He has killed three in Seminole Heights.

Took his inspiration from the wealthy Stephen Paddock who killed 58 and wounded over 500 - hey! if one rich guy can do then why not another wealthy guy!

Police refuse to give details on killer:

Dugan cautions residents not to assume the person in the video is white or black, male or female. Investigators want to know what the person saw and eliminate him or her as a suspect. source

All three victims were bus riders and all three were shot at or near bus stops. Mitchell and Naiboa both attended Middleton High School. Mitchell was waiting for a bus at the stop on North 15th and E. Frierson when he was shot. Two days later, Hoffa was killed, but it would be another two days until her body was found on the 1000 block of E. New Orleans Avenue — about six blocks west of the Ellicott Street bus stop on the No. 9 line. A city worker found her body in a vacant lot. Naiboa was found at North 15th and Conover streets, a few hundred yards south from the No. 9 bus stop where he had gotten off and where Mitchell was killed 11 days earlier. source

Maybe its a new trend wealthy men killing for the thrill of it?