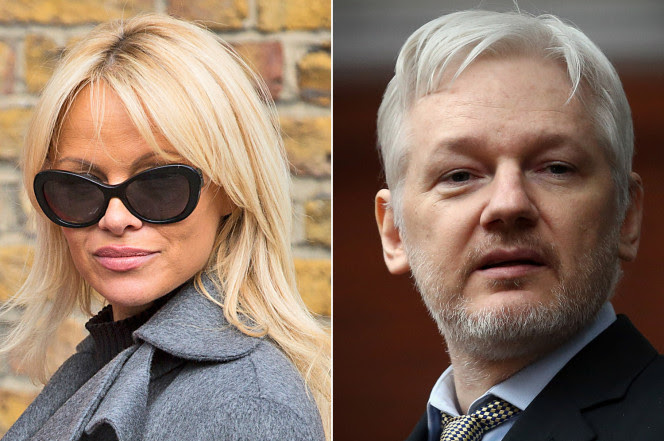 'I've spent more time talking to Julian than all of my ex-husband combined!' Pamela Sue Anderson

She was the couirer sent to London to give CIA data dump to Assange.

Pamela Anderson has visited Julian Assange at the Ecuadorean Embassy in London five times in the past four months - sparking rumors they are in a relationship. The Baywatch actress and model is said to be dating the Wikileaks founder while he is stuck inside. A political activist told Page Six: 'She seems to be wearing sexier outfits every time she visits.' Assange, 44, is wanted for questioning in Sweden over a rape allegation from 2010, and has avoided extradition by living in the embassy since June 2012. He has been camping out at the Ecuadorean Embassy for five years. Anderson was first spotted at Assange's residence in September of 2014. The meeting was set up for Anderson to try to persuade Assange to back her new foundation, which supports women who are victims of sexual abuse. Daily Mail Read More>>>>>>


As for the Muslim CIA employee?

He is a close associate of CIA’s Counterterrorism chief "Roger"

"Roger" is a Muslim Convert


For every cloud of smoke that follows a CIA drone strike in Pakistan, dozens of smaller plumes can be traced to a gaunt figure standing in a courtyard near the center of the agency’s Langley campus in Virginia. The man with the nicotine habit is in his late 50s, with stubble on his face and the dark-suited wardrobe of an undertaker. As chief of the CIA’s Counterterrorism Center for the past six years, he has functioned in a funereal capacity for al-Qaeda. Roger, which is the first name of his cover identity, may be the most consequential but least visible national security official in Washington — the principal architect of the CIA’s drone campaign and the leader of the hunt for Osama bin Laden. In many ways, he has also been the driving force of the Obama administration’s embrace of targeted killing as a centerpiece of its counterterrorism efforts. WP>>>>>>>

"Roger" should have had his card pulled along time ago.

Any man baptized Catholic that converts to Islam is messed up in the head, if you will.

As for the Data Dump Leaker  - he is a Muslim employee of the CIA, who used his close relationship with "Roger" to steal documents from the CIA.

This was done under John Brennan's watch.