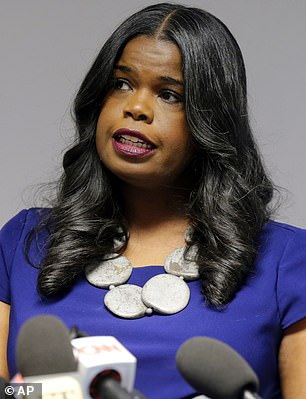 For slaves and women do not conspire against tyrants; and they are of course friendly to tyrannies and also to democracies, since under them they have a good time......

'I make no guarantees, but I'm trying': Chicago prosecutor who 'intervened in the Jussie Smollett case on behalf of Michelle Obama's ex-aide and texted the Empire star's family' faces more scrutiny as furious cops demand a federal probe into her conduct

The prosecutor who texted Jussie Smollett's family at the request of a former Michelle Obama aide to discuss getting the FBI to take over the Empire actor's case has come under renewed scrutiny after all charges against him were sensationally dropped. Chicago police are furious about Tuesday's decision to drop Smollett's charges and are demanding that Cook County State's Attorney Kim Foxx be investigated over her handling of the probe. Foxx recused herself from the case last month for exchanging text messages with one of Smollett's relatives in the days after the actor told police he was attacked on January 29. Police have now renewed calls for Foxx to face an Attorney General investigation for trying to wrestle the case out of the Chicago Police Department's hands and have it led by the FBI instead. Authorities are concerned about whose interests Foxx was working in when she - after being contacted by former Michelle Obama aide Tina Tchen - tried to steer the investigation in the direction the Smollett family wanted. Source