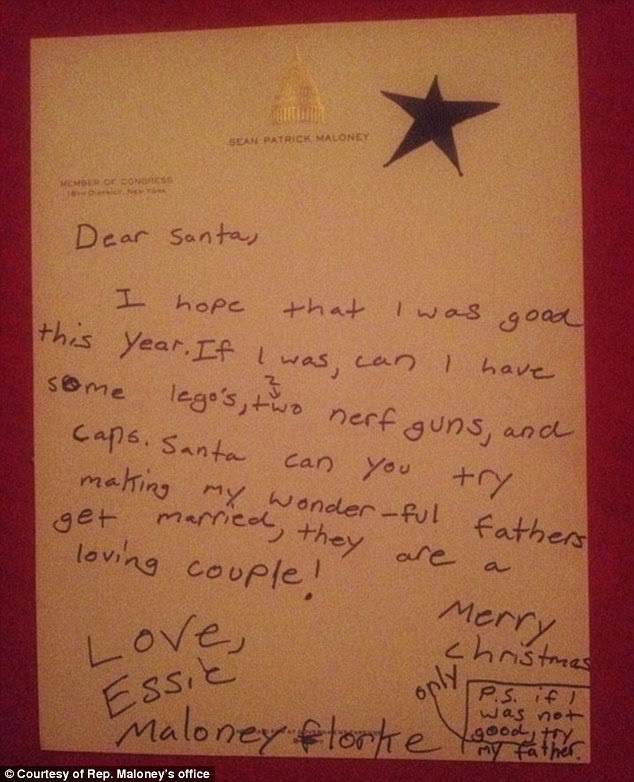 
New York Rep Sean Patrick Maloney, 47, became the second openly-gay congressman to marry in office when he wed longtime partner Randy Florke, 51, in a ceremony on Saturday. The couple, who have been together for more than two decades, became engaged on Christmas Day after their youngest daughter wrote an endearing note to Santa, asking her two 'wonder-ful fathers get married'. Maloney, a Democrat who represents New York's 18th District, got married at home in Cold Spring, New York in a ceremony that was attended by more than 250 guests - including House Minority Leader Nancy Pelosi. The ceremony was officiated by the Rev Shane Scott Hamblen and held at St Mary-in-the-Highlands Church, where locals gathered on the sidewalks outside to see the parade of political attendees. The newlyweds didn't speak to reporters at the ceremony or reception, but did issue a statement on the special day. 'Even after 22 years together, we're overwhelmed by how blessed we feel to celebrate this special day with out friends and family,' the couple said in a statement. 'Thank you to all our friends near and far for their love and support as we continue to fight to ensure all families can experience the joys of a lifetime commitment.' Daily Mail Read More>>>>>>