He-She-It Paul 'Christina' White Drove Three Fifth Graders To The Liquor Store To Buy Them Booze So That They Could Get Drunk & Discuss Transgender Issues! 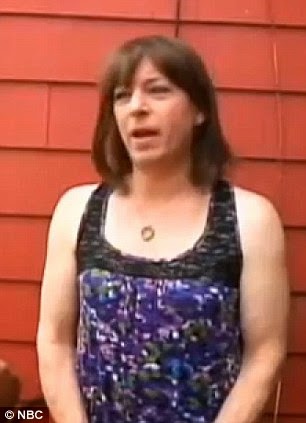 A transgender woman allegedly bought three fifth-graders, including her 10-year-old daughter, alcohol and let them get 'dangerously drunk' at her Rhode Island home. Paul White, known by her transgender name Christina, is accused of using the girls' money to buy them booze before pouring them shots on Monday night. The 'stumbling and slurring' girls were rushed to hospital, one with a blood alcohol reading of 0.084. Police said they found numerous bottles of alcohol and a bucket of vomit at White's Burrillville home. White was also drunk. While the mother-of-one admitted she had a drinking problem, she strongly denied giving the girls alcohol. 'I would never give 10-year-olds alcohol,' White told NBC 10 News. 'I was having a few drinks last night, and I think the girls got into it.' However Crystal Chamberlain and Jamie Taft, the parents of one of the girls, said their 10-year-old daughter told them White supplied the alcohol. Daily Mail Read More >>>>>>>>>