Another Perverted & Nasty Jew - Dirty Dov Charney Ousted Out Of His American Apparel For....Well....Being A Jew! 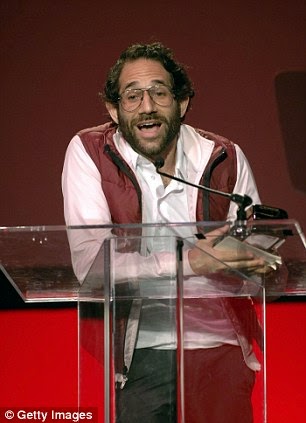 Why Do Jews Make It So Obvious?


The embattled founder and CEO of American Apparel has been ousted by the board of directors after spending years fighting sexual harassment allegations. The company's board voted unanimously Wednesday to replace Dov Charney as chairman and 'terminate his employment as president and CEO for cause,' a press release stated. Charney, 45, a native of Montreal, Canada, who first started American Apparel in 1991 as a wholesale business peddling T-shirts, had faced repeated accusations of sexual misconduct made by female employees, but all the cases have been either dismissed or settled. In 2011, four former American Apparel workers filed a lawsuit against Charney, but at the time the company came to his defense, claiming that the plaintiffs conspired to 'shake down' the fashion tycoon with an estimated net worth of $20million. In 2012, Mr Charney once again came under fire when Michael Bumblis, a former store manager in Malibu, California, accused the CEO of rubbing dirt in his face and choking him. Charney also allegedly called the man 'a wannabe Jew' and used a derogatory term for homosexuals. Bumblis was later fired from his job. American Apparel once again backed Charney, insisting that Bumblis' termination was in line with company policy. All the claims were either settled or dismissed. Under the terms of Charney's contract, he will be given 30 days before his termination is finalized. It is unclear what the alleged misconduct was. In the meantime, board members Allan Mayer and David Danziger have been appointed as co-chairmen. ‘We take no joy in this, but the Board felt it was the right thing to do,’ Mayer said in the statement obtained by Los Angeles Times. ‘Dov Charney created American Apparel, but the Company has grown much larger than any one individual and we are confident that its greatest days are still ahead.’ Daily Mail Read More>>>>