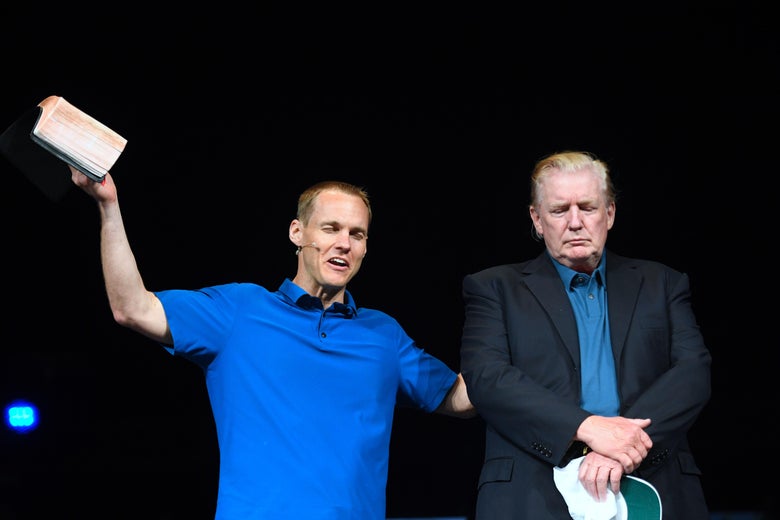 I wanted to share all of this with you in part because I know that some within our church, for a variety of valid reasons, are hurt that I made this decision. This weighs heavy on my heart. I love every member of this church, and I only want to lead us with God’s Word in a way that transcends political party and position, heals the hurts of racial division and injustice, and honors every man and woman made in the image of God. So while I am thankful that we had an opportunity to obey 1 Timothy 2 in a unique way today, I don’t want to purposely ever do anything that undermines the unity we have in Christ. David Platt

(Bloomberg) -- President Donald Trump said he called off retaliatory strikes on three Iranian sites following the downing of a U.S. Navy drone because the action would not have been “proportionate.”

“We were cocked & loaded to retaliate last night on 3 different sights when I asked, how many will die. 150 people, sir, was the answer from a General,” Trump tweeted Friday. “10 minutes before the strike I stopped it.”

A commander in the Islamic Revolutionary Guard Corps told a semi-official news agency Friday that the drone had been accompanied by a manned U.S. spy plane that Iranian forces decided not to target.

The planned U.S. attack, ordered after Iranian forces shot down a U.S. Navy drone over the Strait of Hormuz, would have involved airstrikes and was close to being carried out when it was stopped, said an administration official, who would not discuss whether the plan might still be revived. The official was granted anonymity to discuss a national security matter.

National Security Advisor John Bolton was pushing for the strike. Trump changed his mind based on some additional information, an official said. Iran was not given any warning of possible retaliation.

With tensions still high, the Iranians called the Swiss ambassador, Markus Leitner, into the Foreign Ministry for talks. The Swiss embassy also represents U.S. interests in Iran, and the Swiss envoy traditionally serves as the conduit for messages between the two nations, which have no diplomatic relations. But Brian Hook, the U.S. special representative for Iran, told reporters the Iranians “continue to reject diplomatic overtures to deescalate tensions in the region.”

In one of his Friday tweets, Trump said “I am in no hurry, our Military is rebuild, new, and ready to go, by far the best in the world.” Source

Maybe Trump checked with his Lady Spiritual Adviser....before firing off a missile..