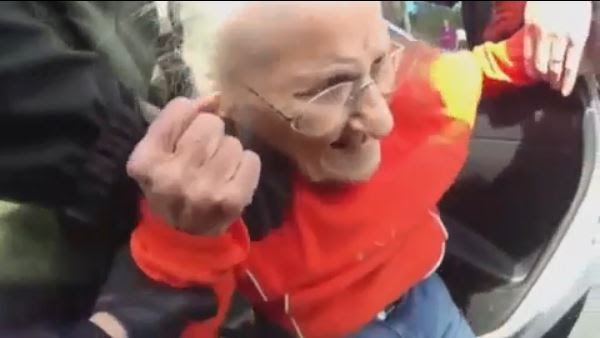 TAVARES — Juanita Fitzgerald woke up on Friday, her 94th birthday, in an $80-a-night motel wearing the same clothes she had on when she was arrested three days ago. Fitzgerald spent two nights in the Lake County Jail after being evicted from her home and refusing to leave, and now she sits in her motel room and wonders where she will live. “I don’t care if it’s just one little room,” Fitzgerald said, as long as she can plant some pickled beets. She has bruises and scratches on her ankles, which she says she got from the shackles she wore in jail. A spokesman for the jail said he doesn’t know if Fitzgerald was shackled, but it is protocol for inmates to wear restraints. FItzgerald says she’s overwhelmed by the media attention. “My daughter said, ‘My God, mother, you’re all over the world!’” Fitzgerald said. Advocates with the Mid Florida Homeless Coalition met with Fitzgerald on Friday to make plans for where she will stay the next few nights, until they can agree on a more suitable place for her. Source