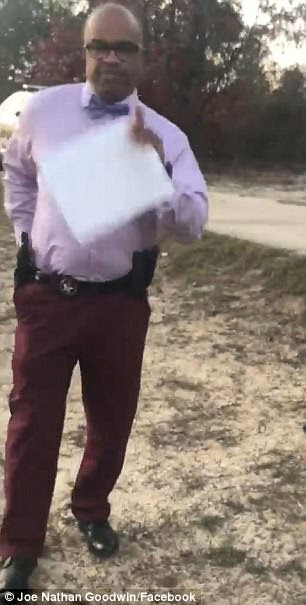 A Georgia man says he was ordered to cut his own dog's head off after police shot it dead. Joe Nathan Goodwin was at work on Friday when he received a call from his distraught girlfriend Natasha Dakon telling him the police had turned up at their home and shot their dog after receiving reports it had bitten a neighbor. He rushed home to find the family's beloved dog, which appears to be a Pit Bull cross, dead and the police on his front lawn. Little did he know, the worst was yet to come. The cops, who claimed they'd shot the animal when it lunged at a deputy, then ordered the grieving pet owner to decapitate his two-year-old dog, Big Boy, so his head could be sent for rabies testing. The stunned Goodwin, who began recording the confrontation with the officers on his cellphone, says that when he refused to cut off his dog's head, Crawford County Sheriff's Office investigator James Hollis threatened to throw him in jail. Source