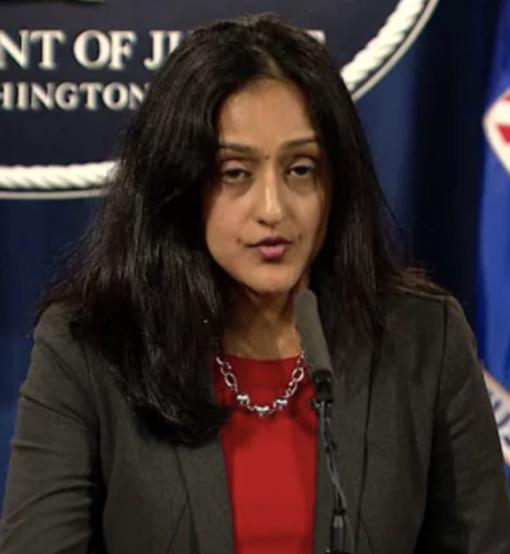 Ghoul
Vanita Gupta
Dear President Biden:
As the chief legal officers of Indiana, Arkansas, Louisiana, Oklahoma, and Texas, we write today to urge you to withdraw the nomination of Vanita Gupta for Associate Attorney General. Ms. Gupta’s past comments and track record have demonstrated her disinterest in meaningful police reform in favor of destructive policies that would defund the police. Her nomination will further divide our nation instead of implementing policies to protect our communities and support law enforcement.
As someone who served for many years chairing the Senate Judiciary Committee and overseeing the Department of Justice (“Department”), you know very well how essential it is for the Department to have a healthy, cooperative relationship with local and state law enforcement. Respectfully, with Ms. Gupta’s recent public, adverse statements toward police, putting her in such a senior position would seriously damage that relationship. Now more than ever, the public ought to be fully confident and reassured that the relationship between the federal government and local law enforcement exudes mutual cooperation and respect.
As you know, the roughly 18,000 local law enforcement agencies across the country are the tip of the spear when it comes to protecting our communities from criminals. 2020 was a difficult year for many reasons, including a rise in violent crime in our cities. Many metropolitan areas ended 2020 with a record number of homicides.1 At this juncture, we need to support our police and provide them resources to help make our cities and neighborhoods safer. This is not the time for the Department to pull back policing and implement policies that would shift resources to other priorities and “decrease police budgets.”2
Ms. Gupta has a history of making radical statements that do not support providing law enforcement with the resources needed to succeed. Instead, she wants to shift scarce resources to other priorities rather than hire more police.3 But, contrary to her line of thinking, hiring more police does reduce crime.4 To be sure, she has received backing recently from national organizations, but she has demonstrated a hostility to rank and file law enforcement. Should she be entrusted with making policies that will affect all local law enforcement and prosecutors, the result will be higher crime rates, more families torn apart by homicides and other violent crime, and neighborhoods where kids feel like they have no choice other than to take part in a life of crime.
While Ms. Gupta’s backers would claim that she supports providing law enforcement with additional resources, her past comments betray her intent to defund the police. In fact, she wants to get away from a “policing approach”5 and has urged Congress to “redirect government dollars away from policing practices rooted in the criminal-legal system.”6 Calling on Congress to shift resources from police to other priorities is a call for defunding the police, and that is not something Americans support. This is a time when our local law enforcement agencies need additional resources, not fewer. Around the country law enforcement offices struggle to fill openings that some have called a hiring “crisis.”7 It will not help the situation to make law enforcement officers’ jobs more difficult by forcing upon them a radical agenda with fewer policing resources.
Endorsing such a radical nominee is no way to bring about unity. Our local law enforcement officers protect our families, our neighborhoods, and our cities, often at great risk to themselves. Policies to limit their ability to do their job will not make us safer but will instead put us—and them—at an increased risk of violence. Meanwhile criminals who have no respect for the law or human life will be given more freedom to wreak havoc on our streets. Ms. Gupta has endorsed a radical agenda that is at odds with most Americans. She has advocated to limiting religious liberties,8 and once called religious exemptions to the contraception mandate an “attack on women’s rights.”9 She advocated allowing transgender students who identify as boys to play girls’ sports, 10 and supports packing the courts. 11 In testimony before the United States Senate, she indicated her belief that all Americans are racist.12 Her worldview and low esteem of Americans are far outside the mainstream in the United States.