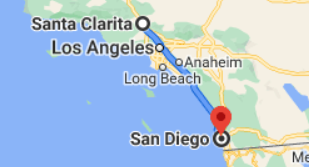 9 MARCH 2021
SANTA CLARITA
Get your tinfoil hats, folks. It’s conspiracy theory time. SOMETHING exploded in the hills near Newhall on Tuesday night. That much is certain. The video doorbell and security camera footage proves it. In one video posted on social media, you can hear what sounds like a helicopter traveling overhead, and you’ll see a bright flash followed closely by the sound of an explosion, but the audio and video cut off immediately after the explosion. In another, where someone’s doorbell camera just happens to point in the right direction, you can see a light that appears to ascend from the hills, then a bright flash, followed several seconds later by the loud “Pop!” of an explosion, as the sound travels more slowly than the light. People who heard it — and plenty of people did — described the sound as being quite loud, like that of a crash or an explosion, as opposed to something like fireworks or gunfire. Whatever it was, it was not “small.” Then, a few hours later, a Federal Aviation Administration emergency beacon’s “ping” was detected in the hills near the Newhall Pass. A multi-agency search-and-rescue effort was initiated, as the circumstantial evidence — the flash, the bang and the beacon — seemed to indicate a downed aircraft in the area. But, the FAA reported, no aircraft had been reported missing or overdue in the area. All through the next day, search teams from the county Sheriff’s Department, the Fire Department and the Civil Air Patrol tried to zero in on the phantom crash site, to no avail. By Thursday, the search was called off, having come up with zero, zilch, nada. So, what was it? Source
10 MARCH 2021
SAN DIEGO
San Diego residents left baffled by mystery BOOM which shook the city for three seconds - and no one can explain what happened
A mysterious boom was heard across San Diego at 4.52pm on Wednesday and residents reported feeling shaking for about three seconds, echoing similar incidents last month and last year. People reported feeling the windows and doors of their homes rattle as the United States Geological Survey said it did not record even a slight earthquake, the San Diego Union Tribune reported. However, one Twitter user noted that the Southern California Seismic Network, a co-operative project of Caltech and the USGS, recorded what appears to be the boom on a live feed on YouTube of its seismograph. The thunderous noise caused other social media users to contemplate what may have caused the sound, with top theories being: fighter jets from the nearby Camp Pendleton military base and stormy weather. Source
at March 14, 2021