Aristotle On Marianne Williamson & DARK PSYCHIC FORCES...Slaves And Women Have A Good Time Under Democracies...

For slaves and women do not conspire against tyrants; and they are of course friendly to tyrannies and also to democracies, since under them they have a good time......


Marianne wins the internet! 2020 Democrat Williamson is most-searched for candidate online after she captivated debate with her stream of consciousness and call for 'a moral uprising'

Marianne Williamson's 2020 presidential campaign has gained momentum as the self-help guru became the most-searched for candidate during Tuesday's debate in Detroit. Williamson and nine other presidential hopefuls fought to stand out over the course of the three-hour showdown - the first half of the party's second debate. Google Trends data showed the author was the most-searched candidate in 49 states during the debate. The only state where she didn't dominate search trends was Montana, where Gov Steve Bullock took that slot. While she took up the second-shortest amount of speaking time at eight minutes and 52 seconds, per CNN, Williamson dominated a Drudge poll as over 47 percent of viewers declared her the winner of the debate. Source 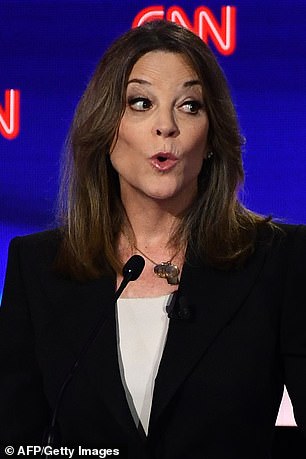 'If you think any of this wonkiness is going to deal with this dark psychic force of the collectivized hatred that this president is bringing up in this country, then I'm afraid that the Democrats are going to see some very dark days.' Marianne Williamson
at July 31, 2019