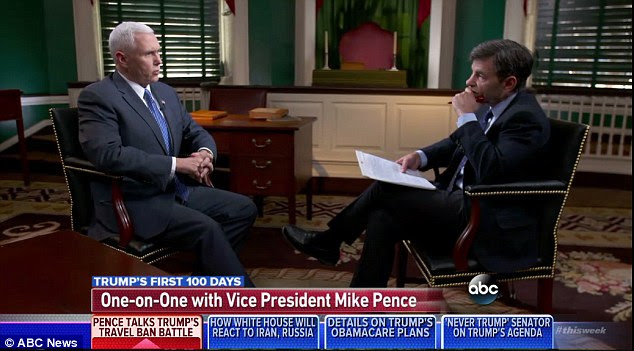 Vice-President Mike Pence said anti-LGBT discrimination had 'no place' in Donald Trump's administration as he backed the president's decision to uphold protective measures for federal workers. Pence told ABC News anchor George Stephanopoulos during an interview aired Sunday that 'in the patriot's heart, there's no room for prejudice'. The White House on Tuesday released a statement saying an executive order signed by Barack Obama to protect LGBT federal workers against discrimination would remain in place. A draft order had been circulating, outlining plans to overturn the 2014 protections. Daily Mail >>>>>>>>

The White House
Office of the Press Secretary
For Immediate Release
January 31, 2017

President Donald J. Trump Will Continue to Enforce Executive Order Protecting the Rights of the LGBTQ Community in the Workplace

President Donald J. Trump is determined to protect the rights of all Americans, including the LGBTQ community. President Trump continues to be respectful and supportive of LGBTQ rights, just as he was throughout the election. The President is proud to have been the first ever GOP nominee to mention the LGBTQ community in his nomination acceptance speech, pledging then to protect the community from violence and oppression. The executive order signed in 2014, which protects employees from anti-LGBTQ workplace discrimination while working for federal contractors, will remain intact at the direction of President Donald J. Trump.