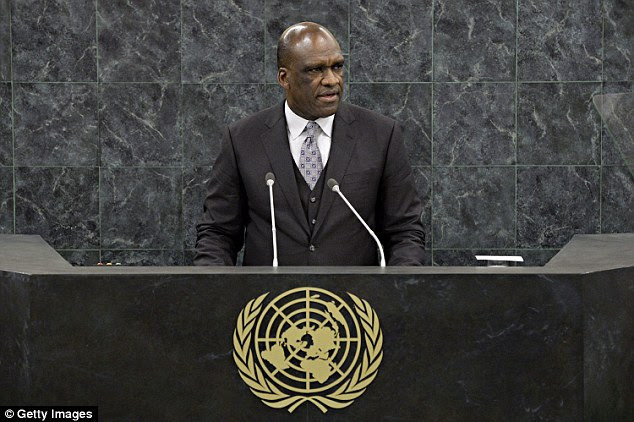 Former UN General Assembly president John Ashe dies at 61 amid corruption case where he is accused of accepting $1million in bribes from Chinese businessmen
Former U.N. General Assembly President John Ashe, who was facing criminal charges in a bribery case, has died aged 61. Ashe, who is from the twin-island Caribbean nation of Antigua and Barbuda, died at his home in Dobbs Ferry, New York, on Wednesday. He was accused by U.S. prosecutors of abusing his position and taking $1.3million in bribes from Chinese businessmen and arrested in October on federal charges. Ashe's death was confirmed by Sgt. Vincent Ingani, of the Dobbs Ferry Police Department, but he gave no further details. A younger brother in Antigua, Paul Ashe, and his attorney in New York, Jeremy Schneider, also confirmed his death without providing details about the cause. Asked if his client had died from a heart attack as reported by an Antiguan media outlet, Schneider said that was his understanding, Reuters reported. But Schneider later clarified that he did not know the cause of death. 'I do not know definitively what the cause of death was,' he said. 'It's a tragic loss for his family and the community. He was preparing to fight his case at trial.' Daily Mail Read More>>>>>>