Sheryl Sandberg seems to be “leaning out” of her press push to hush the hysteria over Facebook privacy and user-data leaks. After many significant days of silence, the Facebook COO was quizzed by “Today’s” Savannah Guthrie on Friday, followed by an interview with Fox News’ Dana Perino. Sandberg was next due for a sit-down on ABC’s Sunday show “This Week With George Stephanopoulos,” as she and CEO Mark Zuckerberg scramble to subdue the social- media scandal. But, according to TV insiders, when “Lean In” author Sandberg learned she would be quizzed by trailblazing journalist Martha Raddatz, and not ABC News star Stephanopoulos, the Facebook doyenne demurred. Source

Now Sandberg backs out of an ABC interview.....

I still say her husbands death was bizarre.

Maybe her husband's death was just an accident - if so - I call his death an Evil Portent for Facebook.

God will allow the old serpent to cause divisions among those who reign in every society and in every family. Our Lady of La Salette 19 Sept. 1846 (Published by Mélanie 1879)

Dave Goldberg's death highlights unseen dangers of treadmills
(CNN) How does a seemingly healthy 47-year-old millionaire die in a treadmill accident? While it's unclear what caused Dave Goldberg's fall, it turns out treadmill-related accidents are quite common. Goldberg, the CEO of SurveyMonkey and husband of Facebook COO Sheryl Sandberg, died Friday after he fell and hit his head on a treadmill during a family vacation in Mexico. He suffered from traumatic brain injury and hypovolemic shock, a condition tied to severe blood and fluid loss. Please...treadmill accidents are more comical than deadly. 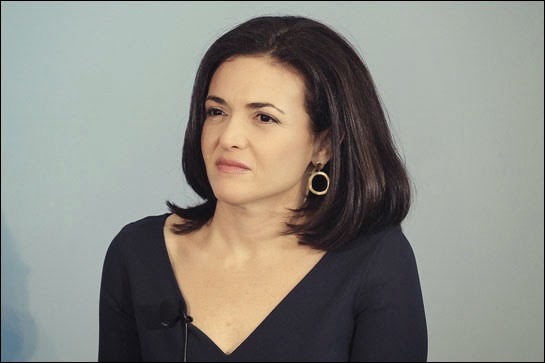 In Lean In, Sheryl Sandberg examines why women’s progress in achieving leadership roles has stalled, explains the root causes, and offers compelling, commonsense solutions that can empower women to achieve their full potential.

In Lean In, Sandberg digs deeper into these issues, combining personal anecdotes, hard data, and compelling research to cut through the layers of ambiguity and bias surrounding the lives and choices of working women. She recounts her own decisions, mistakes, and daily struggles to make the right choices for herself, her career, and her family. She provides practical advice on negotiation techniques, mentorship, and building a satisfying career, urging women to set boundaries and to abandon the myth of “having it all.” She describes specific steps women can take to combine professional achievement with personal fulfillment and demonstrates how men can benefit by supporting women in the workplace and at home. The book is nonsense, woman can not have it all.  But Mr Goldberg failed to tell his wife that.