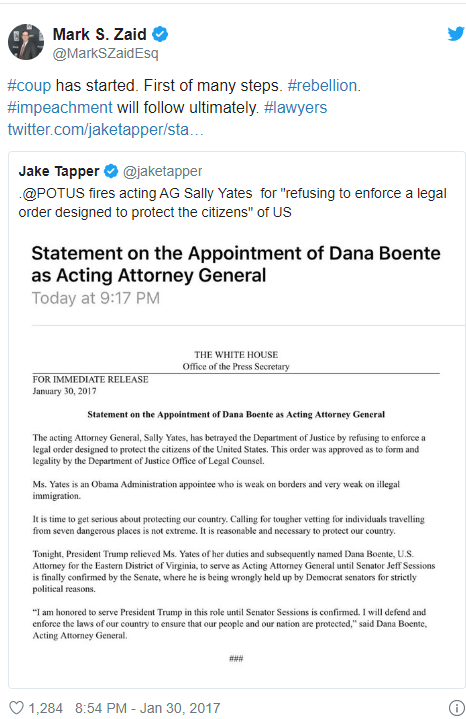 Mark Zaid, one of the attorneys representing the intelligence community whistleblower at the center of the Democrats' ongoing impeachment inquiry, tweeted conspicuously in January 2017 that a "coup has started" and that "impeachment will follow ultimately." Then, in July 2017, Zaid remarked, "I predict @CNN will play a key role in @realDonaldTrump not finishing out his full term as president." Also that month, Zaid tweeted, "We will get rid of him, and this country is strong enough to survive even him and his supporters." Amid a slew of impeachment-related posts, Zaid assured his Twitter followers that "as one falls, two more will take their place," apparently referring to Trump administration employees who defy the White House. Zaid promised that the "coup" would occur in "many steps." The tweets, which came shortly after President Trump fired then-acting Attorney General Sally Yates for failing to defend federal laws in court, are likely to fuel Republican concerns that the anonymous whistleblower's complaint is tainted with partisanship. Trump's call with Ukraine's leader, which is the subject of the complaint, occurred in July 2019. “The whistleblower’s lawyer gave away the game," the Trump campaign's communications director, Tim Murtaugh, told Fox News. "It was always the Democrats’ plan to stage a coup and impeach President Trump and all they ever needed was the right scheme. They whiffed on Mueller so now they’ve settled on the perfectly fine Ukraine phone call. This proves this was orchestrated from the beginning.” Added House GOP leader Kevin McCarthy: "We should take [Zaid] at his word that this is a coordinated, premeditated plot to overturn the election." Source 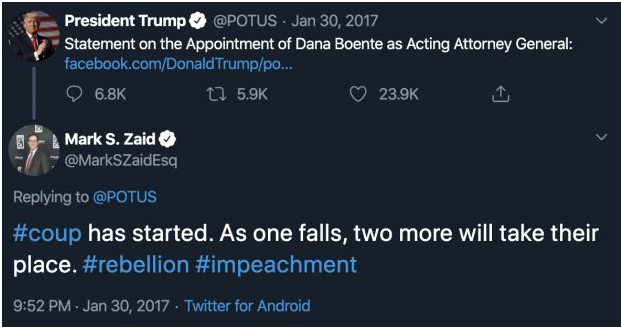 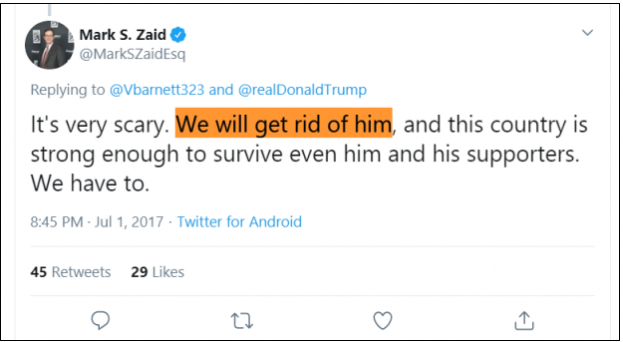